A celebrity team will start their Challenge Sport Relief across the Namib Desert in Africa today.

Originally, the skis were to be used to cross a frozen lake in Mongolia, but the challenge was moved due to the coronavirus epidemic.

Skis can be used on the sand instead.

Celebrities will face the 35 degree Celsius heat as they walk in the scorching sun on some of the tallest sand dunes on the planet.

The Namib Desert located in Namibia in Africa is known as the oldest desert in the world.

Celebrities take on the challenge of spotlighting mental health and the ways people can try to stay mentally strong when facing something really difficult.

One in four people will be affected by mental health issue in their lifetime, and each of the celebrity participants said they were passionate about talking about this issue. 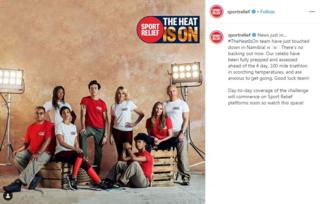 Before leaving, Karim shared his thoughts on social media, saying: “It’s a great cause, we’re all very excited, but we’re all very nervous because it’s going to be really, really hard.

“We have a goal set, we are going to break it, morale is high and we hope to raise as much money as possible and of course raise awareness of the mental health that we are all passionate about.”

An hour-long documentary will show the ups and downs of the team as they travel on BBC One from March 9.

Dr Zoe Williams, who has offered her support to the celebrities for the past two months, said: “Their main physical challenges now will be dehydration and heat exhaustion. They will need to take very good care of their feet because the sand combined with heat is a threat to the feet. “

Sport Relief is back on Friday March 13.